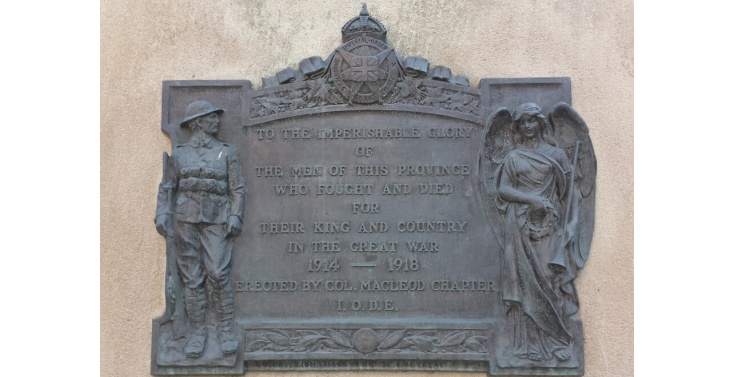 From rolling fields of golden wheat to the towering waves of the North Atlantic, and onwards into the muddy trenches of the Western Front, forty-nine thousand young Albertans fought in the First World War. Over six thousand of them never returned home, their mortal remains buried in the field, many with naught but a simple cross marking their fate. Yet, some of them could not be accorded even that simple honour, for their bodies were never found. For these missing Canadians, there is no known grave, no marker, and no headstone noting their individual noble sacrifices.

It is for these soldiers that the Infantryman Statue was erected in Calgary’s Central Memorial Park in June, 1924. It is a headstone to the fallen, the courageous Albertans whose remains have yet to be located. One of them is 18-year-old Thomas Riley, from a prosperous ranch-owning family in the city. Perishing amidst shellfire during the Battle of Passchendaele, his body was never recovered – his family did not receive an official letter informing them of his fate. The news was broke to them only by Thomas’ uncle, a fellow Albertan who served as an officer. After the Armistice, the Rileys placed a cross bearing Thomas’ name over a grave thought to be his; sadly, it had been misidentified. To this day, Tom Riley remains on active duty, along with nineteen thousand other Canadians – their memory and sacrifice for our nation immortalized across Canada in monuments like the Infantryman Statue. 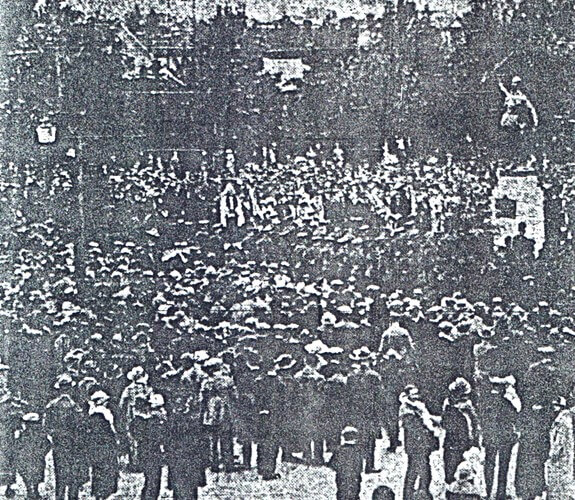 Hundreds of attendees surround the Infantryman Statue on the day of its unveiling. (Source: City of Calgary Archives)

Also known as the Soldiers’ Statue, and more officially as the I.O.D.E. (Imperial Order Daughters of the Empire) War Memorial, the Infantryman Statue was unveiled on Sunday June 23, 1924 – just a month short of the tenth anniversary of the First World War’s commencement. The statue’s creation was funded by the efforts of the Col. Macleod Chapter of the Imperial Order Daughters of the Empire, a charitable organization formed in 1900-1901 dedicated to the promotion of patriotism, loyalty, and service via the collective power of women in cities across Canada. Cast in bronze, the statue was draped with the Union Jack until it was officially revealed to the hundreds of spectators that Sunday morning. A reverent silence filled the square as hats came off the attendees’ heads – the “solemnity of the moment”, as one contemporary newspaper put it, was palpable:

“The dedication was then pronounced, followed by ‘The Last Post,’ and as the bugle notes rang out, many thoughts turned to Flanders’ fields, forever hallowed by the sacrifice of their loved ones whose memory is so splendidly perpetuated in the new monument”. 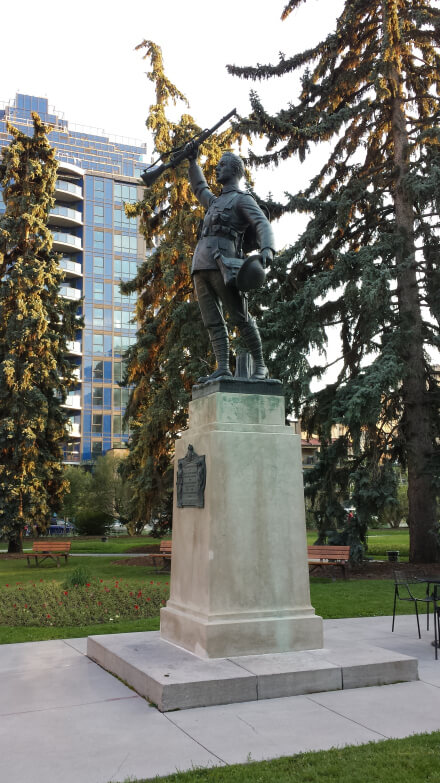 The monument was designed by the famed sculptor Coeur de Lion MacCarthy, who also created the Winged Victory monument in front of Vancouver’s Waterfront transit terminal in addition to many other military memorials around the country.

Educators: Click HERE to download a Lesson Plan that explores the Soldiers’ Statue and two other Calgary monuments.

Main photo: The plaque on the base of Soldiers’ Statue recognizes the sacrifice of the men “who fought and died for their king and country in the Great War” (Credit: greatwar100reads.wordpress.com).