August 9, 1945: In the waning days of the Second World War, Lt. Robert Hampton Gray of the Royal Canadian Naval Volunteer Reserves (RCNVR) sank the Imperial Japanese Navy’s Amokusa, a Type A “Kaibokan” ocean patrol vessel (not a destroyer as most sources say – it is more comparable to a longer and more heavily-armed Flower class corvette).

Piloting the gull-winged Corsair from HMS Formidable as part of the Royal Navy’s Fleet Air Arm, he led his squadron on a low-level attack run against five Japanese warships in Onagawa Bay in Miyagi Prefecture, Japan. Despite being hit with flak on his approach, he nonetheless pressed home his attack, dropping his 1,000 lb bomb on the Amokusa. Unfortunately, his plane crashed soon afterwards, possibly due to the sudden change in weight and aerodynamics by the dropped bomb and/or by the bomb’s blast since he was flying so low. His body was never recovered and remains presumed missing.

For his actions that day, he was awarded the Victoria Cross – one of only two ever awarded to Fleet Air Arm pilots throughout the Second World War and the highest honour accorded to Commonwealth service personnel. He was also the last Canadian to perish in action in during WWII.

But Lt. Gray achieved one further distinction that made him unique among all Allied personnel: he has been the only member of the Allied forces to have received a memorial dedicated to him on Japanese home soil: at Sakiyama Park by Onagawa Bay, a stone monument was erected in 1989 overlooking his place of death. The monument was repaired and rededicated in 2006. After the devastating earthquake and tsunami of March 2011, the memorial was moved across the bay to the Onagawa Hospital. 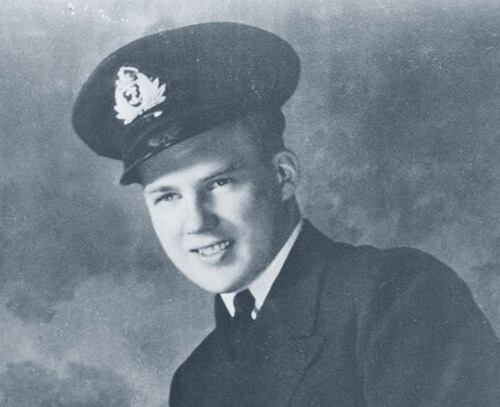 To learn more about Robert Hampton Gray, check out Vintage Wings of Canada.

To read his VC citation, see the entry on the National Defence website.