On November 4, 1956 Lester B. Pearson proposed the creation of what would become the first large-scale United Nations Peacekeeping force to resolve the rapidly deteriorating situation in the Middle East.

Egyptian President Gamal Abdel Nasser’s decision to nationalize the Suez Canal Company threatened the British economy and triggered a joint British-French-Israeli invasion. Many Canadians were afraid that this invasion would start another world war and conflicted about whether they should support their British allies. Ultimately, Canada chose to support Pearson’s proposed United Nations Emergency Force (UNEF). 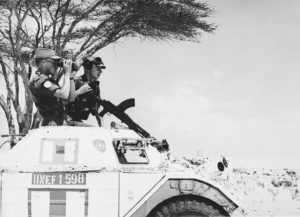 Canadian members of the United Nations Emergency Force (UNEF) on the border between Egypt and Israel, 1962 (Credit: DND/LA /PA-122737).

Over fifty nations voted in favour of the creation of the UNEF and twenty-four volunteered contingents. However, Canada almost didn’t get the opportunity to participate. Egypt originally opposed Canadian involvement due to Canada’s historic ties to Great Britain. It was only after Denmark and Norway threatened to withdraw from the mission that Egypt finally consented to the presence of a Canadian contingent. The first Canadian troops arrived in Egypt at the end of November and were put to work identifying and clearing minefields.