By the time the Canadian Corps arrived in Flanders, Belgium, in October 1917 the Third Battle of Ypres had been raging for three months and the British Expeditionary Force had suffered over 38,000 casualties. The battlefield had been transformed into a muddy swamp that swallowed the bodies of injured and dead soldiers and the village of Passchendaele had been obliterated by months of continuous shelling. Canadian Corps Commander Sir Arthur Currie knew that it wasn’t “worth a single drop of blood.” 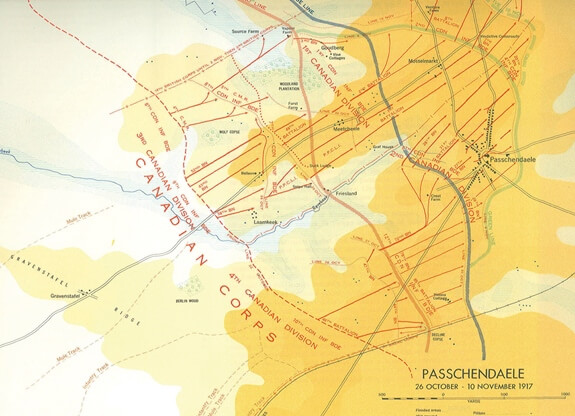 Yet the British weren’t willing to give up and the Canadians were ordered to move into the devastated region. On the morning of October 26 they launched the first phase of their attack. Shivering in the light rain the Canadians rose from their trenches and began to fight their way towards Passchendaele Ridge. As the soldiers advanced along the perilous duckboards lain by the Canadian labour battalions they struggled to maintain their balance, while the muddy swamp, impacted by artillery shells, continually erupted in towers of mud. They knew that if they slipped they could drown in the clingy, yellow muck. 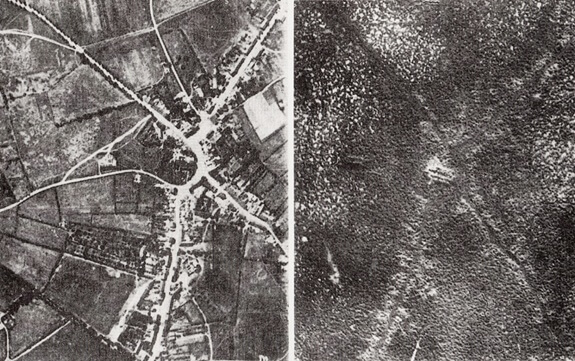 Before and after photo of the village of Passchendaele (Credit: Unknown).

By the end of the day the Canadians had only advanced 700 metres—well short of the day’s objectives—and had suffered almost three thousand casualties. They spent the next three days desperately fighting to hold their position and preparing for the next phase of their attack. The battle was far from over.

It took the Canadians two weeks to capture Passchendaele Ridge. More than 4,000 Canadians died in the battle and another 12,000 were wounded. Passchendaele has since become known as one of the most horrific battles of the First World War. 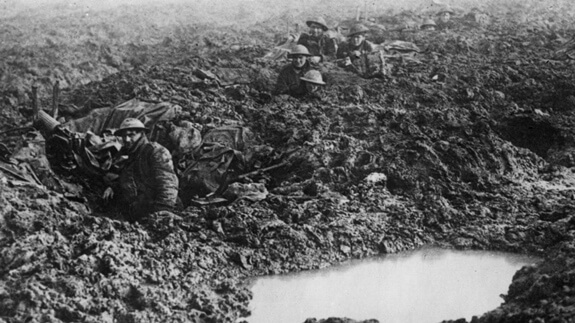 Canadian soldiers defending from shell holes at Passchendaele. How many soldiers can you count? (I can see at least 9) (Credit: Getty images via The Times).

For more information, see Library and Archives Canada’s page: “3rd Battle of Ypres”. To look at additional images, go to “The worst place on Earth: Images from the Battle of Passchendaele” (National Post 2017).