August 12, 1914: The Newfoundland Patriotic Association (NPA) is formed. Eventually becoming the colony’s Department of Militia, the NPA was responsible for coordinating Newfoundland’s contribution to the Great War. Between the call for volunteers and the end of September, nearly 1000 recruits had signed up. However, only half of these fulfilled the physical requirements, and these “First Five Hundred” soon moved to their tents at nearby Pleasantville.

Unfortunately, Newfoundland was ill-prepared to even begin training its troops. They had no rifles, no uniforms, and no headwear. With a shortage of khaki material in the province, the recruits had to wear navy blue for their leg wrappings, giving them the nickname of “The Blue Puttees”. Their order of Ross rifles from Canada and Australian-style slough hats arrived only after the First Five Hundred departed for further training in England.

Despite this ignominious beginning, the Newfoundland Regiment would go on to become one of the most famous and well-respected units to fight in the First World War, going through their baptism of fire on the hilltops of the Gallipoli peninsula in late 1915. They would eventually earn the prestigious honour of being granted the “Royal” title to their name – one of only three wartime bestowings in British military history. 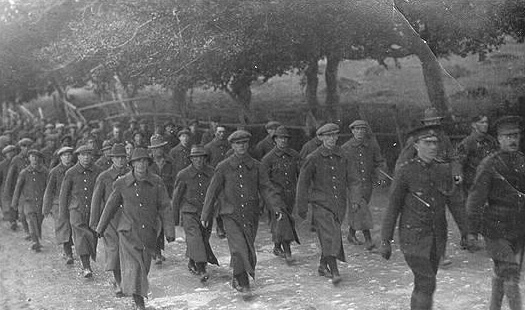 Members of the Newfoundland Regiment march through Pleasantville (Credit: Newfoundland and Labrador Heritage).

To learn more about the history of the NPA, check out the Newfoundland and Labrador Heritage site.

Main photo: A group photo of some of the first officers of the Newfoundland Regiment and government officials (Credit: Newfoundland and Labrador Heritage).