As the NHL season reaches the all-star break, we are again reminded of some of the awards presented at the end of the professional hockey season and their respective connections to our military. In a previous post, we discussed the origin of the Conn Smythe Trophy. Today, we will examine the Lady Byng Trophy.

Evelyn Byng was the devoted wife to the reputable Julian Hedworth George Byng, the Commander of the Canadian Corps from 1916 until after Canada’s success at the Battle of Vimy Ridge. It was Byng’s accomplishment at Vimy that facilitated two personal advancements: he was promoted to command the British 3rd Army and he was given the title of Baron Byng of Vimy in 1919.

Following the war, Julian Byng was assigned the role of Canada’s Governor General from 1921-26. This promotion would require both he and Evelyn to relocate their lives to Canada. The Byng family’s love for sports blossomed while living in our country, especially when it came to ice hockey. During their time in Ottawa, they would often attend Senators games together and their new-found passion for the game of hockey led Evelyn to donate a trophy to the sport. The trophy bearing her name would promote sportsmanship and gentlemanly play; both were characteristics that Evelyn admired and felt should be rewarded. 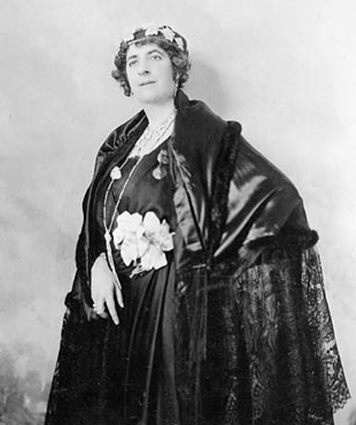 As Julian’s position as Governor General was ending, it was decided that the pair would return to Thorpe Hall (their home in Essex, England). Julian would pass away there in 1935.

Evelyn would decide to move back to Canada at the outbreak of the Second World War as she feared that her home was vulnerable to attacks. For the duration of the war she volunteered at a local thrift shop to raise funds for the Red Cross and the Women’s Active Service Club. When she wasn’t working, her time was dedicated to writing her memoirs “Up the Stream of Time.”

Lady Byng would return home to England following the war and would pass away at Thorpe Hall on June 20, 1949.

More than 80 names been engraved upon the Lady Byng Trophy, a list that includes such greats as: Wayne Gretzky, both Bobby and his son Brett, Hull, Gilbert Perreault, Stan Mikita, Frank Boucher, Red Kelly, and the latest winner, Johnny Gaudreau.

For facts about Lady Byng, see Revolvy, and for a bit of background on the trophy and the woman who envisioned it, see “99: Stories of the Game”.

Main photo: Depicted above is picture of Julian and Evelyn Byng beside an image of the Lady Byng Trophy (Credit: NHL Lady Byng Memorial Trophy/NHL).