September 28-29, 2003 – The Flower class corvette HMCS Sackville earns the dubious distinction of becoming the last Second World War vessel to sink another ship. During Hurricane Juan, when winds unexpected reached 140 km/h, the recreational schooner Larinda was tied up to the Sackville when the latter broke loose from her moorings. Sackville, with nothing to hold her back, rammed into and sunk Larinda. Thankfully, no one was injured in the incident.

Larinda was subsequently raised from the harbour floor after two weeks at the bottom of Halifax harbour. Hand built by Larry Mahan of Massachusetts over a period of 26 years, the schooner’s damage, compounded by the raw sewage that used to fill the bottom of the harbour, was deemed irreparable. However, Art Scott and Charlene Corkum thought otherwise, and bought the vessel from Mahan soon after it was raised. After nine years of nearly non-stop repairs, Scott and Corkum managed to make Larinda shipshape and seaworthy again, keeping as many of the original components as possible – including the 1928 Wolverine diesel engine, one of only two working examples in the world. 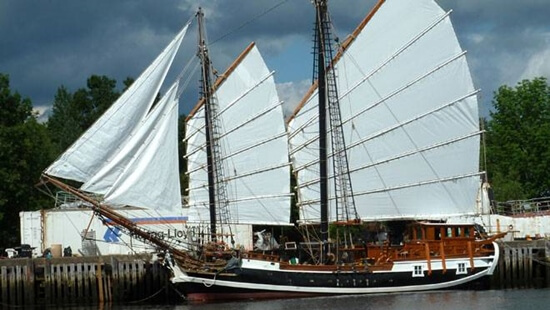 To learn more about the Sackville’s history, check out Canada’s Naval Memorial.

To learn more about what happened in 2003, check out CBC.