On October 23rd, 1969, the Royal Canadian Navy (RCN) would experience the worst peacetime disaster in its history. The unexpected explosion on the HMCS Kootenay No.258 will go down as one of the most tragic accidents in RCN history.

Our story begins on September 5th, 1969, when the HMCS Kootenay was ordered to join a task force exercising in United Kingdom waters. These exercises would prove to be routine for the HMCS Kootenay, that is, until she began her return to Canada on the 23rd of October. As the ship began to reach max speed, a bearing on the starboard gearbox gave out and caused an explosion in the engine room. Although the Kootenay stayed afloat, the explosion claimed the lives of 7 Canadians and injured 53 others. Able Seaman Allan “Dinger” Bell witnessed the entire event after having just relieved the previous engine staff.

Dinger recalls the events starting around 08:20 when he:
“heard this whoosh and suddenly there was this wall of flame coming from the starboard gear box. It was immediately followed by a blast of fire went completely around, whooshed all through the engine room. We were all immediately on fire…I can recall Mckinnon and the engineer trying to turn back the throttle to slow us down because we were at full power, then all bedlam broke loose…everyone was on fire and everyone was trying to live…everything was calm there was no pain you’re on fire, your skin is dropping off and I just knew I was going to die…[sic]”.
Luckily for Bell, he would manage to survive the explosion with the help from a fellow crew member.

Investigations after the tragic event found that the bearing had been improperly installed 4 years prior to the explosion. The HMCS Kootenay was later repaired in Halifax, Nova Scotia. Following that, the ship was converted to an improved Restigouche-class Destroyer and recommissioned in July 1972. She was paid off in 1995 and then sunk outside Puerto Vallarta, Mexico in 2000 (to be used as an artificial reef). 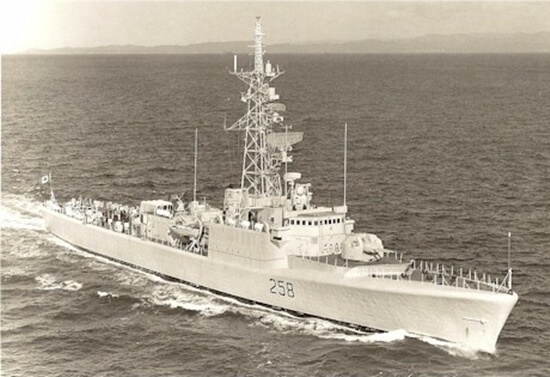 To learn more about the explosion aboard HMCS Kootenay, check out Haze Gray.