A pilot in the Royal Canadian Air Force, his first combat sortie was almost his last. Daryl Kenneth Seaman was born on April 28, 1922, in the small town of Rouleau, Saskatchewan. Growing up during the Great Depression of the 1930s, he learned to appreciate thriftiness, hard work, and tenacity. Participating in many athletic endeavours, he earned the nickname “Doc” as a result of him carrying his sporting equipment in a leather case that resembled a doctor’s bag. A seasoned heavy equipment operator by age 17, he enrolled in the University of Saskatchewan’s engineering program.

However, the arrival of the Second World War put his education plans on hold, and in early 1941 he attempted to join the South Saskatchewan Regiment. With his excellent performance in Science and Mathematics, however, he was quickly convinced to join the Royal Canadian Air Force instead.

An “above average” pilot, he flew twin-engine Lockheed Hudson bombers. Smaller than the more famous aircraft like Lancasters, the Hudsons were used for a much wider variety of roles: ground attack, reconnaissance, anti-submarine warfare, anti-shipping, special operations, and troop transport.

For the four-minute Condensed Version of the above video, please click here.

February 20, 1943: one of Doc’s earliest operational missions was to ferry his Hudson – one of twenty-four – from England to Gibraltar. This long-distance journey stretched the fuel tanks of the Hudson, and their arrival at Gibraltar through poor weather provided no relief. Severe crosswinds prevented them from landing despite three attempts, and Doc had no choice but to divert to the alternate landing field at Casablanca. Although they and three others safely landed, the other twenty were not so lucky. Soon, he and his crew were posted to Algeria, where they patrolled the Mediterranean in search of U-Boats and downed airmen.

March 29, 1943: a little over a month after their arrival in North Africa, Doc was sent to attack a damaged U-Boat off the Italian coast. Unfortunately, the U-Boat managed to give Doc the slip…just as a Messerschmitt 210 dove out of the sky to attack Doc’s Hudson! A 20mm shell from the Me 210 missed Doc, but two smaller machine gun bullets struck his left leg. The cockpit was a grizzly scene: not only had Doc been hit, but one of the British gunners on board, Fletcher, had been killed by the Messerschmitt’s fire. Thankfully, the Me 210 was not a particularly reliable aircraft, which may explain why Doc managed to elude it through the cloud cover. His left leg a bloody mess, his navigator and best friend, Tom McGlade, and the other gunner, Thorne, tied his left foot to the rudder pedal. By the end of the trip, Doc had lost all feeling in that leg, but nonetheless managed to safely land the plane.

“I was given the chance to do something and so many others were not.
I thought, ‘I must do something with my life…”

Returning home in 1944 as the U-Boat threat in the Mediterranean abated, Doc resumed his engineering studies at the University of Saskatchewan. Together with his brothers, he successfully graduated and started up Seaman Engineering, which remained for the rest of their working lives. But the Seaman brothers also started up another company in Calgary, called Bow Valley Resources, in 1962. It became a multi-billion dollar international oil company. But this was balanced by a love of the natural environment, and in 1987 Doc bought the 16,000-acre OH ranch, establishing it as a heritage rangeland with a focus on conservation. 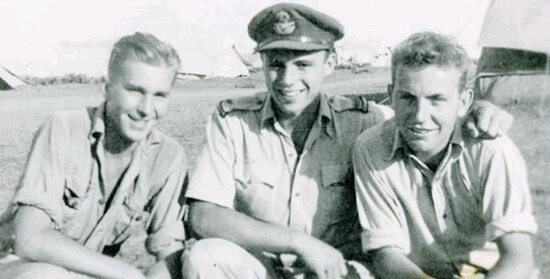 Another lasting contribution was his leadership in the construction and establishment of the Southern Alberta Urology Centre, which opened in 2010. His philanthropy was especially evident at the University of Calgary, at which he had set up several high-value scholarships. To read more about Seaman’s support of the community, please see Calgary community foundation receives $117-million gift from ‘Doc’ Seaman’s estate.

But perhaps the most iconic act of Doc’s was to help bring the Flames hockey team home to Calgary in 1980. One of his proudest moments was when the Flames won the Stanley Cup in 1989.

Doc Seaman passed away in 2009. A well-balanced and extraordinary individual, he was truly a Monumental Canadian.