On the 2nd of September 1998, Swissair Flight 111 took off from JFK Airport in New York on a scheduled flight to Geneva, Switzerland. The flight carried 215 passengers, 14 crew members, and cargo that included cash, diamonds, and a Pablo Picasso painting. As the flight cruised along the Nova Scotian coast, the cockpit filled with smoke. The flight crew diverted their course for an unscheduled landing at the Halifax International Airport, unaware that a fire had begun within the aircraft. Shortly after having made that decision, flight and communication systems began to fail. At 22:31 Atlantic Standard Time the plane struck the water at the estimated speed of 555 km/h (350 g-force) and was instantly destroyed. No one aboard survived.

Moments after the crash, anyone with a boat in Peggy’s Cove rushed out for what they thought would be a rescue effort. Even though the gruesome mess of debris surrounding the would-be rescuers made it clear that there was little chance for survivors, the seafarers began to recover whatever they could from the wreck: clothes, trays, luggage, and anything else they could salvage. 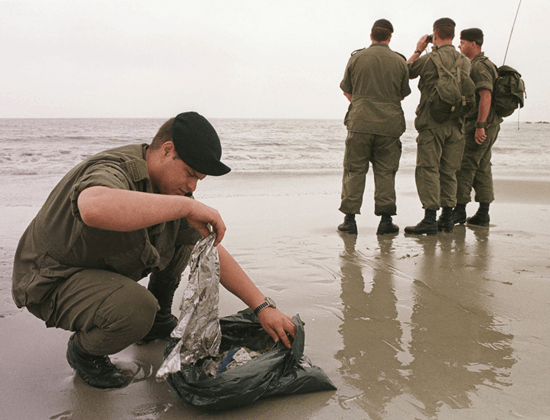 The Canadian Army supplied personnel to assist in scouring the shorelines as well as spotting debris from the coast (Credit: The Daily Beast).

All services of the Canadian Forces played an integral part in the recovery efforts. The Navy provided the HMCS Preserver as the command ship for the recovery effort. Preserver organized the recovery effort and held all the debris and remains gathered by the other Coast Guard ships. It really was a team effort: The Air Force provided helicopters and Hercules aircraft for aerial spotting of debris and remains, and the Army provided personnel for spotting from the coast as well as for processing of recovered materials. Sea King helicopters were used to spot remains; they also showed their respect by showering wreaths onto the site. Navy divers recovered remains from below the ocean`s surface, and HMCS Okanagan, a Canadian submarine, was used to find the missing black boxes from the flight. 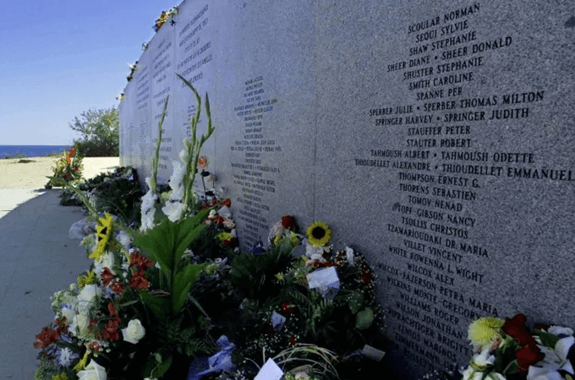 Names of the victims killed in the crash of Swissair Flight 111 appear on the granite memorial in Bayswater, N.S. (Credit: Steven Senne/AP).

Ultimately, the crash was devastating to both the countless relatives of the lost travelers and to the teams tasked with recovery. Many soldiers and civilians who assisted in the recovery efforts have developed post-traumatic stress disorder from the gruesome work. Today, there are two memorials in Nova Scotia for the crash victims, one is in Bayswater and the other in Peggy’s Cove. The monuments are designed so that they overlook the crash site and form a triangle when aligned with the site. The Swissair Flight 111 crash also revolutionized airline safety by imposing guidelines, particularly in the areas of wiring and fire hardening, that made flying safer for everyone.

See this informative documentary about Swissair Flight 111 (CBC’s The Fifth Estate) and view a timeline of events here.