During the week of November 3rd, 2017, Activision released another much-anticipated instalment in their Call of Duty franchise. This WWII iteration will be a return to their roots and is said to follow the United States 1st Infantry Division, commonly referred to as The Big Red One. While not all of the real-life elements of the campaign have been released, it is reported that the storyline will recreate the U.S. 1st Division’s major battles as they progressed across Europe.

In 1944, The Big Red One and the Canadian Corps fought together during the D-Day Normandy invasion when the Canadians struck Juno Beach and the Americans assaulted the nearby shore at Omaha. In fact, of the two, the Canadians were the only unit to reach all their objectives on the first day of the assault.

Once a toehold on the continent was gained, the Americans began to move eastward through France. The Canadian troops, who were situated between the U.S. 1 Div. and the English Channel, were participating in a similar push. They manoeuvred over the coastal French countryside, passed through Belgium then the Netherlands, and finally arrived in Northern Germany. Along the way the Canadian troops liberated those channel-side occupied areas while also re-establishing ports and essential logistical lines for the rest of the assault. The Big Red One, on the other hand, took a more direct route into Germany and would end their war in Czechoslovakia.

Although the post-Normandy interaction between the Canadians and The Big Red One was minimal, they both played important roles in the success of 1944, and as you fight your way through Call of Duty WWII keep in mind that the storyline is based upon actual events experienced by real divisions of soldiers, all of whom were contributing to the Allied success 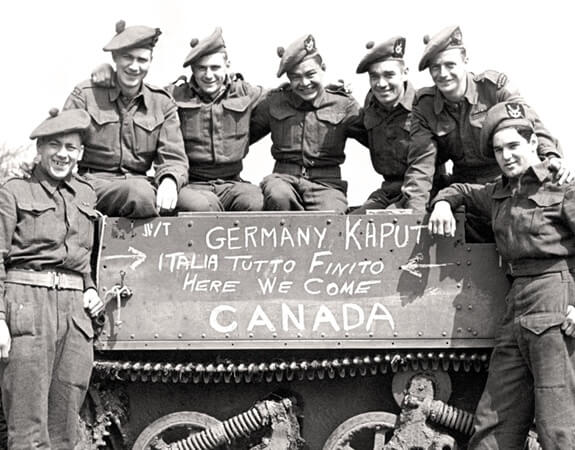 Members of the Seaforth Highlanders of Canada moments after the end of the Second World War (Credit: LAC M#3524685).