Battle of the Scheldt Estuary

October 1944 – Battle of the Scheldt Estuary: The seldom told story of one of Canada’s greatest and most successful efforts in Europe during the Second World War. While British Field General Montgomery’s gaze was fixated on Operation Market Garden, the 1st Canadian Army was slogging its way up the coast under the command of Canadian General Crerar.

The Allied supply lines through France and Belgium had been stretched to the breaking point and the Canadians were tasked with opening up the approaches to port of Antwerp along the Scheldt River estuary – the Breskens pocket on the south shore and Beveland Island on the north. 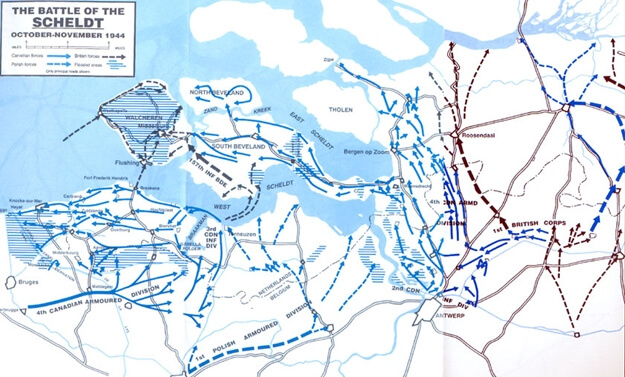 MAP: The Battle of the Scheldt (Credit: Veterans Affairs Canada).

The Germans had prepared several strong defensive lines and it was up to the Canadians to clear the way. It was “polder” country – land reclaimed from the sea. The Germans flooded the fields forcing the Canadians to advance along narrow elevated road ways. It was like Passchendaele: fire, wire, and mire. 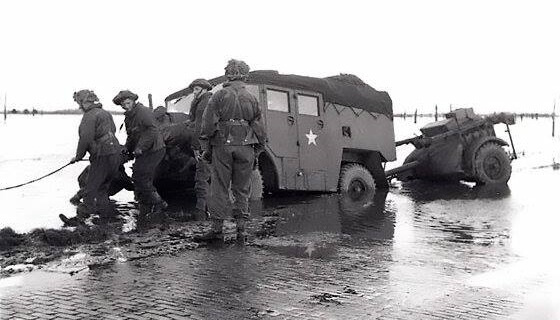 Exhausting, relentless, and incessant fighting occurred. Casualties were heavy. It took five weeks to do the job but by November the cargo ships were arriving en masse – fittingly, the first was a Canadian built ship. It was a stunning defeat for the Germans. They suffered between 10,000- 12,000 casualties and over 41,000 were taken prisoner. The 1st Canadian Army losses were over 12,000 including 6000 Canadians.

To learn more about Canada’s role during the Battle of the Scheldt, see Valour Canada’s “Walcheren Causeway” article describing how the Calgary Highlanders fought tenaciously and ensured success at the end of that October.

To learn more about the liberation of the Scheldt, check out Veterans Affairs Canada.