In an effort to halt German commerce-raiding activities at sea, the Royal Navy had sent Rear Admiral Cradock and a squadron of old and underarmed vessels to meet German Vice Admiral von Spee. Woefully outmatched, Cradock’s largest vessels, HMS Monmouth and flagship HMS Good Hope, were sunk with all hands by the much newer and more powerful SMS Gneisenau and Scharnhorst.

On board HMS Good Hope were four Royal Canadian Navy midshipmen – Cann, Hatheway, Palmer, and Silver. They were part of the first graduating class of the Royal Naval College of Canada, newly established just a few short years earlier when the RCN itself was constituted. Palmer was the top student in the class and Silver was the senior Cadet Captain, while the other two were selected by lot.

The deaths of these four young men were the first in the history of the RCN and, sadly, not the last. They would be avenged only one month later, when von Spee’s squadron would meet its demise at the Battle of the Falkland Islands, December 8, 1914. 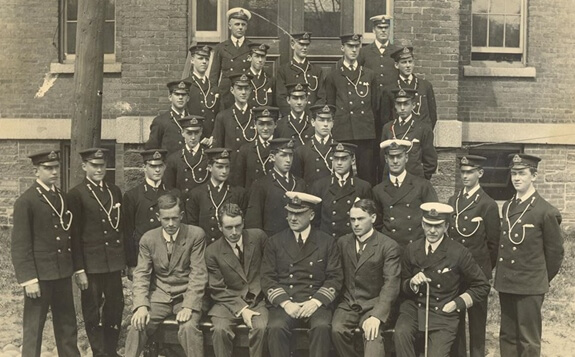 First graduating class of the Royal Naval College of Canada – Cann, Hatheway, Palmer, and Silver are in this shot (Credit: Royal Canadian Navy).

To learn more about the Battle of Coronel, visit First World War website.

To read about the Canadian victims, check out The Ottawa Citizen’s 2014 article: “Canadian Navy marks battle that saw the first Canadian military casualties of the First World War“.