In the summer of 1934 there was a weekend celebration in Toronto: the Canadian Corps Reunion. Tens of thousands flooded the streets. It was a weekend to recollect the old days, to celebrate the brotherhood of war times.

The August 4th weekend was chosen because a mid-summer weekend ensured warm weather. The 4th was also the 20th anniversary of the Declaration of War. The planning was left to Lieutenant-Colonel H.R. Alley, the director of the General Centennial Committee, and F.J. Picking, President of the Legion’s Ontario Command.

However, the Depression made it difficult for those outside of Toronto to make it. Once the dates were announced to the public, people began to raise funds that would in turn be used to bring outsiders into the city for the big weekend.

As the date of the celebration drew closer, veterans from across the nation made their way to the Big Smoke (aka Hogtown, York, T-dot, and many others) with the help of a wide variety of means. 75 men from Vancouver rode to Ontario’s capital on a train they operated. George Sargent of New Brunswick hitchhiked from the east. In total, the estimated number of veterans stood at 90,000; some arrived from Australia, while others travelled from France, New Zealand and the US.

The Venerable Archdeacon F.G. Scott of Quebec, known by most as Canon Scott, preached a sermon on the Sunday afternoon from a text he used almost 2 decades earlier at Valcartier. Scott, the current chaplain to many Army and Navy veterans, told his audience of 300,000 at Riverdale Park that “men from every walk of life had rushed to the defence of the principles of our common heritage”. 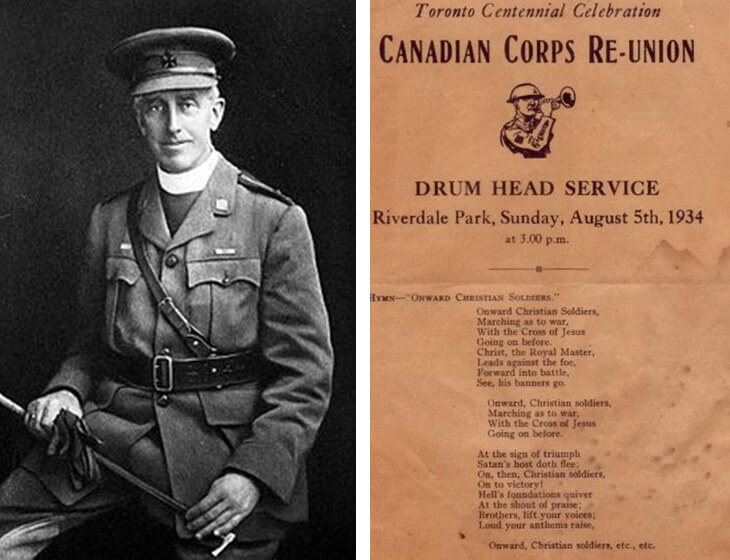 Canon Scott, chaplain of Army and Navy vets; A program handed out for the church service at Riverdale Park (Credit: War, Memory and Popular Culture Archives – The University of Western Ontario – London, Ontario).

To view the entire program, please click on the picture of the program.

It truly was a weekend to remember! One group of men stole a piano, put it on a streetcar, and eventually played it on Yonge Street. In another recollection, an ex-cavalryman tried to get a horse on top of the King Edward Hotel but gave up because the horse wouldn’t fit into the elevator.

It was a weekend that brought veterans back to life.