Sergeant Gander had humble beginnings as a family pet named “Pal”. He was a happy dog with a loving family, but upon scratching a child’s face with his paw, the family decided to give him to the Royal Rifles in fear he would be euthanized if they kept him. The Royal Rifles of Canada gladly accepted their new mascot, and because they were stationed at the Gander Airport in Newfoundland, they renamed him “Gander”. Soon after, he was promoted to Sergeant and was much beloved by all members of the regiment.

Due to their alliance with the Axis forces, it was apparent that Japanese posed a threat to the Commonwealth. The Royal Rifles of Canada along with the Winnipeg Grenadiers were sent out to help protect the British colony of Hong Kong from invasion by Japanese forces who had wanted to capture China. This was Canada’s first land involvement in the Second World War. 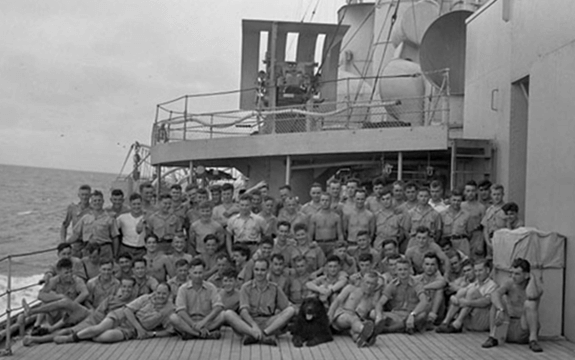 Combat in Hong Kong started on December 8th, 1941, the day after Pearl Harbour was attacked. This surprise attack by the Japanese was against international law, as Japan had not yet declared war against the British Empire. Gander helped the Royal Rifles fight the Japanese forces on three occasions. In the last, a grenade was thrown at the Canadian troops position. Sergeant Gander, in an instance of extreme intelligence and loyalty, picked up the thrown grenade and ran with it toward the enemy, dying in the explosion. In doing so, Gander saved the lives of several wounded soldiers.

After the war, Sergeant Gander was commemorated with the Dickin Medal, which is often referred to as the “Victoria Cross for animals”. He is also listed on the Hong Kong Veterans Memorial in Ottawa along with 1975 men and two women. In addition, statues of Gander and his handler by the legendary Canadian sculptor Morgan MacDonald were unveiled in Gander Heritage Memorial Park in Gander, Newfoundland in July of 2015.

His Dickin Medal citation reads:
“For saving the lives of Canadian infantrymen during the Battle of Lye Mun on Hong Kong Island in December 1941… Twice Gander’s attacks halted the enemy’s advance and protected groups of wounded soldiers. In a final act of bravery, the war dog was killed in action gathering a grenade. Without Gander’s intervention, many more lives would have been lost in the assault.” 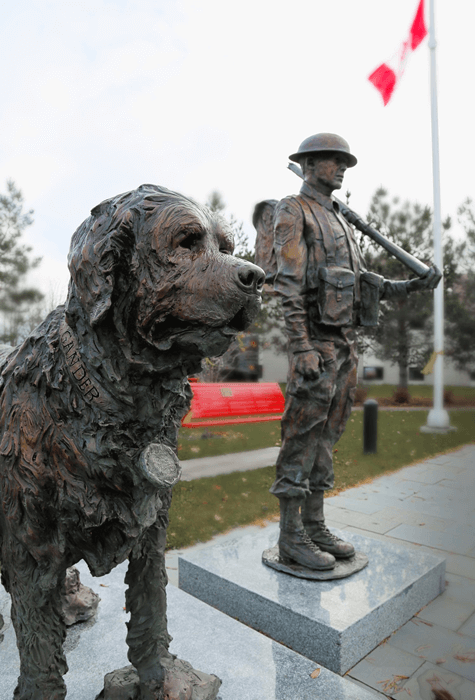 You can read more about Sergeant Gander’s memorial as well as see a video of its unveiling at this July 25, 2015, article by the CBC.

There is also a book written about Sergeant Gander: A Dog Named Gander by Sergeant Major George S MacDonald and Sue Beard.